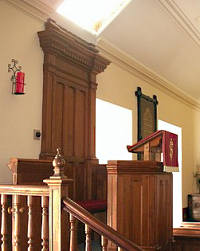 Nigg Old Church, in the Highlands of Scotland, is a fine example of a Scottish parish church and - since it houses a magnificent Pictish stone of the late eighth century, carved with unique Pictish symbols and Christian imagery - it is likely that it stands on what has been a place of Christian worship for at least 1200 years. It has, to this day, an atmosphere of peace and tranquillity.

The church was largely rebuilt in 1626 and the sound of its bell, cast in the Netherlands in 1624, has rung out over the fertile farmland of the parish, on the shore of the Cromarty Firth, since then.

The building contains much that is typical of a Scots church - lofts (galleries) built by the principal landowners to accomodate their own families and tenants; a pulpit on the east wall (where most light entered the building); a desk below the pulpit from where the 'precentor' led the congregation in singing the psalms; and a north wing or aisle, opposite the pulpit, added to the church as the congregation grew. In the churchyard there is a fine collection of carved gravestones.

But Nigg Old also has a special place in Highland history. It was in this church in 1739 that a religious revival began which was eventually to influence much of the north of Scotland. Large numbers of people met for weekly prayer meetings and a prominent part was taken by leading lay preachers known, in Gaelic, as Na Daoine (The Men). Some of them were thought to have supernatural powers, prophesying and seeing visions. The most prominent of The Men of Nigg was Donald Roy who died in 1774 at the age of 105. 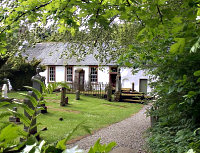 Nigg Old has its odd and curious features. In the churchyard is the Cholera Stone, dating from the cholera epidemic of 1832. One of the elders, on coming out of the church, saw a cloud of vapour hovering above the ground. He believed it to be a cloud of cholera, threw a blanket or cloth over it and placed this large stone on top to keep it from escaping. And inside the church, according to one tradition, the beadle  (church officer) allowed an illicit still to be kept in the space under the pulpit.

The church is now cared for by Nigg Old Trust, supported by donations, and is freely open to the public from April to October.